Skip to content
We would love to hear from you
Pages
PRAXIS > Annual Praxis Week > Seminar – War in Ukraine: Context, Causes and Consequences 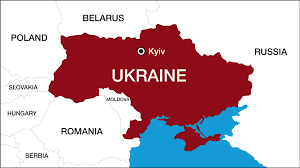 Dr Bozena Cierlik, School of History UCC gave a background to the independent Ukrainian state, its orientation towards Russia and more recently towards the West. In terms of global citizenship she  looked at the impact of the war, including influx of refugees, on neighbouring countries and the European Union.  Her powerpoint is here:  Ukraine Praxis week

Professor Andrew Cottey, Department of Government and Politics UCC asked  ‘what explains the war in Ukraine?’ Drawing on debates and theories in international relations, Andrew explored different understandings of the origins of Russia’s invasion of Ukraine and the reasons for the horrors we are now witnessing in Ukraine. Andrew’s contribution drew on various classic works on international relations.  His talk is here:  Cottey – Understanding Ukraine War

Dr Tatiana Vagramenko, Study of Religions UCC, talked about contested pasts and the Soviet legacy that became hidden actors that triggered the war in Ukraine. “The past is re-written so fast that you don’t know what will happen yesterday”, is a Soviet joke that is even more relevant nowadays. History is instrumentalised, although in different ways, in the politics and everyday life in both Russia and Ukraine. Putin consistently tries to restore what was left from the Soviet Union, glorifying Soviet history and, at the same time, erasing from school textbooks and the public space records on Soviet-era crimes against humanity.  Ukraine’s recent “Memory Laws”, on the contrary, ensured public access to the Soviet-era state archives, particularly the KGB archives, the biggest database of Soviet-era crimes. This material evidence of the hidden history is under attack in the current war.   Her talk is here: Praxis Vagramenko

Professor Andrew Cottey is a Professor in the Department of Government and Politics, University College Cork. He is an expert in international relations, security and defence and his research focuses on European security. He is author of ‘Security in 21st Century Europe’ (Palgrave Macmillan) and many other books and academic papers.