Skip to content
We would love to hear from you
Pages
PRAXIS > Annual Praxis Week > Praxis Seminar: War in Ethiopia Causes, Impact on Civilians and Response of the International Community 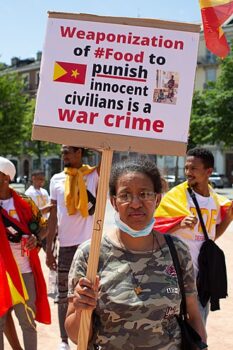 This is a short reflection from one of the speakers, Zelalem Sibhat.

At the beginning of 2018, the four sister parties making up the Ethiopian People’s Revolutionary Democratic Front (EPRDF), the coalition governing Ethiopia at the time, investigated the drawbacks of the regime and concluded that they all bore responsibility for reforms where needed. Following this, Abiy Ahmed was selected as chairperson of the coalition and consequently prime minister of the state in March 2018.

· The government and its allies worked to alienate Tigrayans form other ethnic groups. Other Ethiopians were conditioned to accept any punishment actions against the

Tigrayans as legal and normal. In other words, Tigrayans were criminalised simply for being Tigrayan.

· While Tigrayans were illegally and unjustly detained since PM Abiy came to power this increased immeasurably after the onset of the war on Tigray in November 4, 2020. In October 2021, the state declared a state of emergency, which persecuted Tigrayans. Tens of thousands were detained and executed all over the country. https://www.hrw.org/news/2022/04/06/crimes-against-humanity-and-ethnic-cleansing-ethiopias-western-tigray-zone