Skip to content
We would love to hear from you
Pages
PRAXIS > Guest Speakers > Praxis Seminar Prof. Bourne 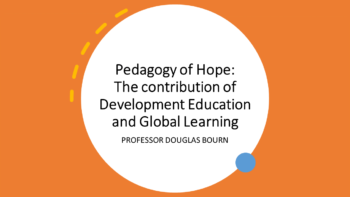 On 10th March 2021 the Praxis Project held a lunchtime seminar which was presented by an eminent scholar in the field of Development Education professional.  Professor Douglas Bourn[1] is Professor of Development Education and Director of the Development Education Research Centre at University College London’s Institute of Education.  He was invited at this point to talk to the staff participants because of his long experience in the field.  The title of his talk was:  A Pedagogy of Hope: the contribution of Development Education and Global Learning.  He was speaking in the context of the major challenges posed for educationalists by the global Covid-19 pandemic and the continued threat of climate change. Professor Bourn argued that there is an ever present need to promote a sense of hope and positive futures and development educationalists have a major role in empowering learners of all ages to engage in societal change that can secure a more just and sustainable world. The ideas and work of Paulo Freire were suggested as particularly relevant. Through a review of the debates around hope and futures education, he examined recent examples from the UK that have related these themes to posing discussions about the purpose of education.

By way of giving examples of hopeful developments he pointed to the fact that so many young people around the world are campaigning for and taking action on the climate emergency, emerging consensus around the world for action and the upcoming Cop26 in Glasgow in October 2021.  The COP26 summit will bring parties together to accelerate action towards the goals of the Paris Agreement and the UN Framework Convention on Climate Change.  He spoke of the Black Lives Matter movement which mobilised thousands of people around the world to challenge discrimination and racism and which had major impact in empowering black communities.  He quoted the following writers on Education as Hope:

‘Because education is essentially a future-oriented project concerned to bring about improvement, specifically growth in the learner’s knowledge and understanding, successful teaching requires its practitioners to teach with hope in mind’ Halpin (2003:16 ) >

Educated hope…combines the pedagogical and the political in ways that stress the contextual nature of learning, emphasising that different contexts give rise to diverse questions, problems and possibilities (Giroux, 2002: 102).

Hope has to be more than personal ambitions or even lifestyle changes or even de-emphasising the seriousness of the problem (Ojala, 2012).

A crucial role of education should be to encourage engagement in the complexity of issues, and the need to go beyond emotional responses to recognition of forces that affect processes of social change.  Hope requires an understanding of ways of dealing with challenging situations and emotional responses and promoting positive ways forward. This means posing desirable futures. He also quoted Feire on the Pedagogy of Hope:

‘One of the tasks of the progressive educator is to unveil opportunities for hope, no matter what the obstacles may be’ Freire (2004:9).

A point which was picked up by the participants was Bourn’s observation that Freire was not proposing an education for hope, he was promoting a kind of education in hope. Followers of Friere, he said, such as Giroux (2011), use the term ‘educated hope’.  Hope is based on the recognition that it is only through education that human beings can learn the limits of the present and the conditions necessary for them to combine a gritty sense of limits with a lofty vision of possibility.  Similar themes of relating hope to praxis can be seen in writings of bell hooks (2003) where she sees a successful pedagogy of hope built on students’ and teachers’ interactions in a form that is  anti-oppressive and encourages reflexivity, dialogue and criticality (Carolissen et.al.2011).

Development Education and Global Learning (and its various conceptual interpretations such as global education and global citizenship education) can contribute to this Education in Hope.  They have a common conceptual base of global social justice, empowering learners to be active global citizens, and to pose a pedagogical approach that is learner centred, participatory, and encourages the challenging of assumptions and dominant societal norms regarding global forces.

Participants then listened to and discussed the film Let’s talk about #Rebooting Education​ which was created by the Development Education Centre South Yorkshire (DECSY), Global Learning London, the Our Shared World coalition and Reboot the Future brings together parents, teachers and children to ask some big questions about the future of education.  Participants were interested in discussing the question: ‘what kind of an education is needed for a rapidly changing and uncertain future’?  One participant was struck by the idea in the film ‘why would we get back to normal when ‘normal’ brought us to where we are now’?  The discussion moved to the idea of creating a culture within our university.  A culture of critical thinking and compassion about global issues, about shared values which mean taking action to preserve nature, use technology as a force for good and promote wellbeing for all.  The discussion on values and culture is of interest to participants which is to be discussed further at the following group session.

On climate change, Professor Bourn suggested creating spaces where young people can share their feelings about climate change issues, without feeling they will be criticised or laughed at; really listening to what students wish to say, so they feel appropriately consulted and reassured that what they share is okay; understanding: the nature of climate change – its origins, impacts and consequences as well as the action being taken to help minimise and adapt to this. Finally, acting and knowing what needs to be done in the classroom, home and community, as well as who one can work with and who will give ongoing support.

On Global Education, he suggested instilling a culture of deep understanding of Sustainable Development Goals, particularly 4.7 which states:

On de-colonising the curriculum, he suggested identifying colonial systems, structures and relationships, and working to challenge those systems.  It is not ‘integration’ or simply the token inclusion of the intellectual achievements of non-white cultures. Rather it involves a paradigm shift from a culture of exclusion and denial to the making of space for other political philosophies and knowledge systems. It’s a culture shift to think more widely about why common knowledge is what it is, and in so doing adjusting cultural perceptions and power relations in real and significant ways (Keele University).

The Black Lives Matters movement and the various campaigns around the climate emergency have been built upon generations of forms of social action, of educational initiatives that have sought to challenge dominant colonial views of the world and the shortcomings of a narrow neo-liberalist and technocratic response to the crises affecting the future of the planet.

These principles and approaches pose the purpose of education in general.

The global pandemic and the threat to the future of the planet as a result of the climate emergency have resulted in many educationalists around the world asking questions about what education is for, how can it be more relevant to the needs of societies today, and how it can help to empower learners to believe in a sense of hope, and that change is possible.

However, it requires action and engagement, and a deepening understanding of the shortcomings of many existing societies and economies.

More emphasis is needed to consider the importance of hope within its practices, and to locate this sense of hope within real world scenarios and options for the future of the planet.  As Freire himself said, there is a ‘need for a kind of education in hope’ (2004:9).