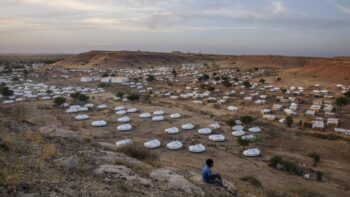 This blog was written by Zelalem Sibhat (Lecturer in Mekelle University, Tigray, Ethiopia), Gerard McCann (Senior Lecturer in International Studies and Head of International Programmes at St Mary’s College, Belfast) and Gertrude Cotter (Lecturer at the Centre for Global Development, UCC) who facilitated a workshop called ‘War, Peace and the future of Development Education’ at the IDEA conference on Wednesday 23 June 2022.  The blog was first written for IDEA but reproduced here.  Below they each share personal reflections on the different elements of their workshop.

I introduced the theme of war and peace by showing images of where there is ‘war’ in the world.  Looking at the map, one participant astutely said ‘I see colonialism in that map’.  My own view is that colonialism is the key root cause of many of the issues we deal with in GCDE.

My input primarily raised questions. For instance, why is the word ‘war’ not to be found anywhere in the Sustainable Development Goals document? Why, with 8 years left to achieve the SDGs, do we find the following facts at the Global Peace Index and United Nations sites?

Another Question: Who is benefiting from war? Can this provide us with any answers? We also explored questions such as, what is the human cost and how are we in Ireland/Europe complicit in war around the world?  As Development Education practitioners we have to ask the question what, is the cost to ‘development’? ‘Development’ means wellbeing, lower inflation, more jobs, better education, health, housing, food security, economic, political and social stability.  Research by the World Economic Forum (WEF) shows that as peace increases, money spent containing violence can instead by used on more productive activities. Conflict and violence cost the world more than $14 trillion a year, the equivalent of $5 a day for every person on the planet.  According to the WEF just 2% reduction in conflict would free up as much money as the global aid budget.

The core question discussed by participants related to the future of Global Citizenship and Development Education (GCDE) in the context of war and peace. Some key points that emerged are the need for capacity building and resources for educators; the power of the personal story; deep dialogue; peace studies needed within GCDE; critical media analysis; asking questions; preventing war; taking collective action.

I would like to see learning groups within the wider GCDE community coming together around themes like war so that we can focus further on some of the issues raised. Through such working groups perhaps we can develop our collective knowledge, skills and methodologies, share resources, develop new resources and take collective action for to further support change.

At the beginning of 2018, the four sister parties making up the Ethiopian People’s Revolutionary Democratic Front (EPRDF), the coalition governing Ethiopia at the time, investigated the drawbacks of the regime and concluded that they all bore responsibility for reforms where needed.  Following this, Abiy Ahmed was selected as chairperson of the coalition and consequently prime minister of the state in March 2018.

In my discussion I reflected on three things related to the overall issue of how we engage with conflict as educators and indeed what it means for Development Education.

The first was in relation to family experiences in Belfast during the conflict in the 1970s and how children’s lived experience was affected by that conflict. I drew on my own circumstances of growing up in West Belfast, looking at how our family and myself as a child were caught up in a war, how we coped and how the government at the time and subsequently never assisted in any meaningful manner in  addressing the issues that the violence was having on normal families as victims of violence, witnesses to violence and as refugees. The point was also made that the education system in the North of Ireland has never adequately supported families which have been subject to the effects of conflict, the legacy of which continues to this day.

The second was based on my work with university colleagues in Lviv and Lutsk in Ukraine and with Ukrainian families in Poland during the war with Russia. I addressed the issues of family trauma, the refugee experience and how civil society and various supporting organizations responded to this crisis. I looked at the work of colleagues, some of whom were actively fighting in the war, and students who were spending their time trying to build their futures in the most horrendous of circumstances.

Finally, and as a last point, I commented on how Development Education and indeed education in general can respond to challenges brought forward by the exceptional circumstances of war. Arguably, Development Education has found conflict a difficult issue to work with. The complexities include having classes which may include students who have escaped conflict which teachers who maybe do not have the knowledge to navigate information pertinent to specific circumstances and conflict scenarios. Development Education has a role in providing information, training and providing positive outcomes for our understanding of conflict, peace building and conflict resolution.   I concluded on this idea: Those of us who teach or learn about conflict, educate in a situation of conflict or work with those escaping conflict, need to consider our own position with respect to our role as humanitarian actors and peace-builders – in practice, we should be constructing a framework of hope and creating positive futures for all involved.